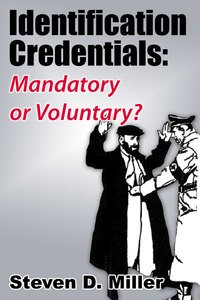 The Bible predicts that the final world government will dominate humanity with forced marks.  The endtimes are here*.

When a nation is overthrown, the subjugated inhabitants do not automatically become second-class citizens of the new government. They must first be enslaved and assimilated. The United States is no different. We have been overthrown. The Department of Homeland Security’s oath of citizenship requires a pledge of unlimited labor to the new government.

Your ID is proof that you have been enslaved by the final world government. You waived most of your rights when you submitted to legalities that you did not understand.

Christians do not have this problem. Just like in Christ’s time under Roman occupied government, Christians today are marginalized, persecuted and denied God-given rights in a world that has only government-granted privileges.  Christ told Christians in Matthew 5:34 to not swear oaths.  Christians cannot qualify for a government ID because they will not worship as gods those who overthrew the U.S. Government.

— In 1964 the U.S. Supreme Court said identification credentials are “abhorrent in the United States.”
— Most Americans have relinquished what traditional law books call “the rights of all mankind”.
— In 1991 the U.S. Supreme Court quoted an old case from the Arizona Supreme Court, “The thought that an American can be compelled to ‘show his papers’ before exercising his right to walk the streets, drive the highways or board the trains is repugnant to American institutions and ideals.”
— Humanity’s millennia old struggle against oppression is near an end. Your ID is proof of your contract. You consented to be governed. You agreed to be collateral for the national debt. You shackled yourself to their chain-of-command. Compliance is an estoppel. You selected your lord / master / provider / protector. You have been assimilated.
— As was suggested by George Orwell — to envision the future just imagine a jackboot stomping on your face forever. Resistance is futile.
— Applying for Identification papers is worship of a graven image.

*A second beast that came up out of the earth, while exercising the authority of the scarlet first beast who raised up out of the sea, upon whose heads is the name of blasphemy, has deceived you into worshiping (with a perjury oath signature) a substitute Lord to get a graven Mark, issued by a final world government (your Novus Ordo Seclorum — secular new world order), symbolically in your right hand, that you use to buy or sell.  Let’s take a closer look.

Preview the first 18 pages
Barnes and Noble $4.95
At Smashwords, the reader sets the price. Help fund the search for truth.

You cannot have rights if you do not defend them.

Learn how to stand up to tyrants (even judges).

An online law course developed by a lawyer. Learn enough legal procedure to win your case. It has helped me. It might be your get out of jail card. Take a tour of the course.
We hold the truth that we are all created equal... Until we consented to be governed.

Find out how you lost your rights -- and why you have no legal standing.

The State owns your children. Find out why.
Subscribe to my email list and download my free report on Anti-Privacy Technology. Big Brother is watching you

Understand why you will always lose your case in any administrative hearing.